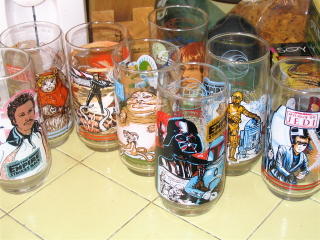 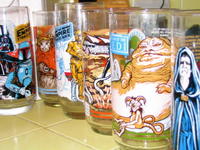 Okay, nerd alert! But can I just tell you how much enjoyment I get out of my vintage star wars (from burger king) glasses. I use them for "everyday ware" because their too cool not to use. And can I also tell you how cheap these things are. I bought mine for $5 bucks each! What tha! These puppies are vintage from my childhood...it's crazy. So if you're inspired by my kick ass collection of cups, then have it, they're all over ebay, like this set here.
Posted by woobot at 11:33 AM 1 comment: 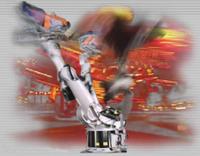 Ever want to know what it would look like to have a giant robot arm hurtle humans through the air? Then check out robocoaster. The videos look sick, or at least they would make you feel sick...
Posted by woobot at 10:11 AM No comments:

Has your favorite TV show ever "jumped the shark"? What's that you ask? Back in the day, an episode of Happy Days had the Fonz jumping a pool of sharks on his motorcycle. So what you say. Well, from that point on, everybody knew the show was out of ideas and going down hill. Now there's a great site that takes people opinions about when a show has "jumped". Lot's of titles and good commentary, definitely worth a look. Jump The Shark
Posted by woobot at 9:44 AM 1 comment: 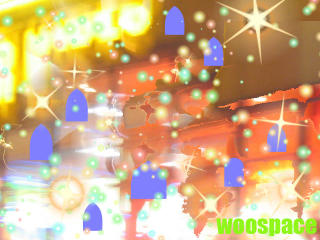 Posted by woobot at 9:27 AM No comments: 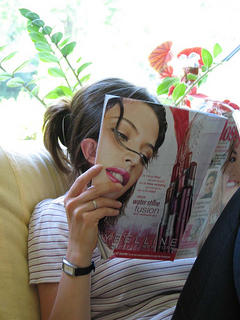 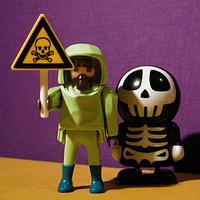 Ah, the power of sharing! Have you really checked out Flickr? (I have a link here for my photos) But Flickr has a cool new service called Interestingness...I know, silly name, but cool feature. It allows you to view the top rated photos for a week, or even of the day. The images here were ones I found "interesting". How about you? Check it out here
Posted by woobot at 9:18 AM No comments: 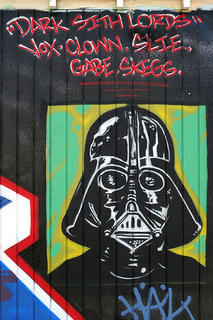 Ever notice the wheat paste and spray paint designs around your city? Want to find out who made what? Check out this link to view LA street art, but you can also find your city in there too.
It's about time you paid more attention to your surroundings. Happy Hunting.
Posted by woobot at 4:44 PM No comments:

If you're in LA, then you really should check out this great play:

Melancholia
Dead soldiers return from war. Some are in coffins and some walk among us. How does killing another human being dehumanize the human spirit?
(you can buy tickets at this site.) 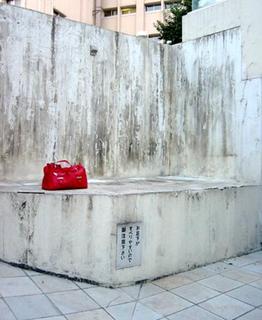 Sugarboots is an artist living and teaching in Japan. Sugarboot's gallery has some very cool cards (which you must see). Sugarboots also writes really funny things in her notebook. Go visit sugarboots now!
Posted by woobot at 9:43 AM No comments: 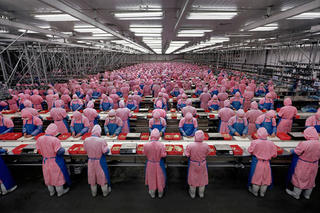 Well, I feel kind of bad because Edward Burtynsky is the first artist I have featured that I don't really think makes great work. He's known for oversized prints of fairly bland imagery (in my opinion). However, I am interested in his latest topic: China. Here is a link to view some of his photographs. Warning, I do find this "China project" a little dubious. Anytime, some rich white guy from Ontario (correction) goes to China to take pictures of factory workers, it kind of makes me cringe. But check it out, some of the shots are kind of interesting.
Posted by woobot at 9:57 PM 2 comments:

One question: what does lighting people's backs on fire have to do with hairdressing? more fire
Posted by woobot at 9:37 PM No comments: 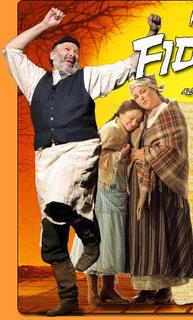 If you're really bored, or really twisted (like me) you'll enjoy viewing Rosie O'Donnell's personal pictures on Flickr It seems a lot of the photos are her backstage at her show, Fiddler on the Roof Yes, that's Harvery Feinstein...and yes that picture is hilarious. Oh, and Rosie, what's up with all the photos of Katrina victims?
Posted by woobot at 8:20 PM No comments: 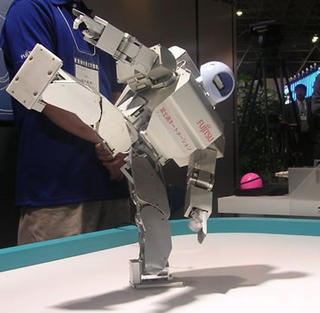 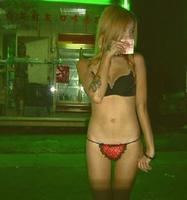 I have found a really interesting blog out of Taiwan, called the Leaky Pen. The commentary is sharp and insightful. I'm sure you will find the explanation for this image interesting. The young woman is a betel nut "vendor", what's that you ask? Well, go to the leaky pen to find out. He also has a great review of Taiwanese filmmaker, Tsai Ming-liang's latest film, The Wayward Cloud. Enjoy...
Posted by woobot at 10:15 AM 1 comment:

Could it be actual Punk Rawk, that's good? Check out These Enzymes' song over at their label's site, doghouse records. They just released an ep, which can be had for cheap. Great spazmatic rhythms, growling, and screaming, plus these guys know what makes a great T-shirt, skulls and bunnies...Here is a review of the band, plus a T-shirt link. Enjoy.
Posted by woobot at 9:03 AM No comments:

The Journal of Short Film 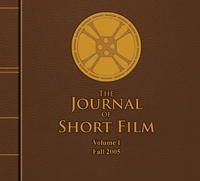 This is a fantastic idea! I know I will become a subscriber, and if all goes right, perhaps even a contributor. The idea is simple, have some of the best short films from all over the world sent to directly to your home. There are so many talented filmmakers without a venue, but now there is. And it's only $36! for the quarterly jounal. Wow, that's a bargain. And you can totally be in on the ground floor, issue no. 1 came out today! Check out the journal of short film, to get your copy, it's really worth supporting. Filmmakers all over thank you.
Posted by woobot at 6:18 PM 1 comment:

Ever been to a Famima?

Don't know what's a
Famima? Well you'll probably be learning soon enough, because the Japanese convenient store chain plans on invading with up to 250 stores in the next 3 years! The very fist store in their invasion opened here, in West Hollywood. I got to check it out last month and was mildly impressed. Assorted sushi, instant noodle, snacks, and drinks are their staples, but there was also stationary and other household goods. The place had definitely been designed for westerners, with some key Asian products missing. I guess I was hoping it would be more faithful to the Asian stores. I had a salmon rice ball and the tiramisu, both were tasty. I want to endorse this place more, as I love the concept of the East/West fusion store, but looking around on their website creeps me out a little. "Pop/Hip/GenX"...Please Famima, don't make me feel weird about shopping with you.
Posted by woobot at 5:38 PM 1 comment:

If you are living in China right now, you don't want to be travelling (Unless you like train stations with thousands of people waiting). Seems spirits are up this year and people are out and about. Read more about China's "Golden Week" Here!
Posted by woobot at 10:36 AM No comments: 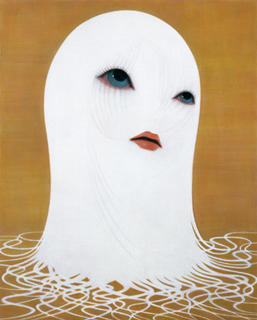 Okay so this post is way late. It's about the show, Little Boy, at the NY Japan Society this summer. Little Boy examines the culture of postwar Japan through its arts and popular visual media. Focusing on the youth-driven phenomenon of otaku (roughly translated as “geek culture” or “pop cult fanaticism”), Takashi Murakami and a notable group of contributors explore the complex historical influences that shape Japanese contemporary art and its distinct graphic languages. The show’s title, Little Boy, is a reference to the atomic bomb dropped on Hiroshima in 1945, thus clearly locating the birth of these new cultural forms in the trauma and generational aftershock of the atomic bomb. Here
is an article about the show with some images also for those who missed the show, you can buy the catalog for sixty clams here.
Posted by woobot at 9:13 AM 1 comment: 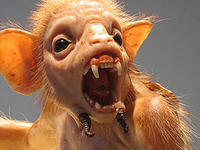 Patricia Piccinini is the kind of artist who you just marvel at. Her work doesn't reside in any one medium, and everything looks a bit familiar, and a bit creepy. Mutant Genome projects, sci-fi environmental protection, or creepy culture critique, she has it all. Oct. 22 she is opening a new show at Robert Miller Gallery in NY, called Nature's Little Helpers. And what lovely helpers they are...
Posted by woobot at 8:43 AM 1 comment: 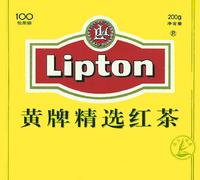 Dave Hickey on art in Vegas 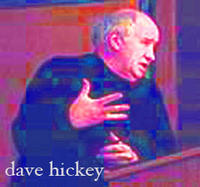 "Las Vegas is a gambling town — it's about risk and spectacle, and that's what art's about..." - Dave Hickey
For more of this great interview with Dave go here!
Posted by woobot at 2:11 PM 2 comments:

That's right folks, What Would Tyler Durden Do? Who? Oh, never mind...Snarky gossip about hollywood, fun stuff! WWTDD
Posted by woobot at 12:59 PM No comments: 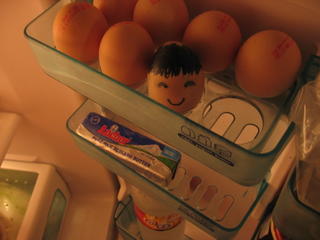 Hooray for the bloggers in China, they're not all being blocked! I found this couple who is teaching in Chengdu (the Du, as we like to say) which is a city very near where Angie and I were. To be honest, it's really the big time compared to our little town, but these kids have made a nice site documenting daily life in the "Motherland". Tomatoe egg noodle is just the kind of project I wish I had to document my China experience. Oh yeah, and they have a little video showing their first Chinese apartment...better than anything I ever had. Enjoy...
Posted by woobot at 10:50 AM 1 comment: 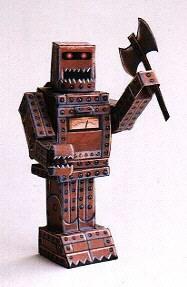 Thinking about Halloween? Cool, me too. Then you're going to love this, a page of build your own "papertoys", all with great Halloween ghoulish Horror. I had to include this "Splatterbot", but I really like the haunted houses and cemetery dioramas. Check everything out here!
Posted by woobot at 10:28 AM 1 comment:

I just saw A History of Violence, and although not perfect, there were some solid performances in it that I really enjoyed!
Posted by woobot at 10:02 AM 3 comments: 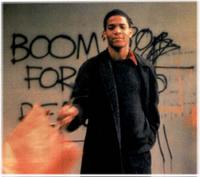 This post on craigs list is a little disturbing...This person can't spell, and is totally stressed to write a paper on Basquiat. Oh, the irony. Here's the Post, Resurch indeed...
Posted by woobot at 9:40 AM No comments: