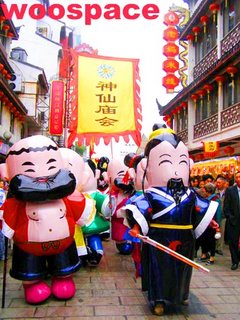 Posted by woobot at 5:34 PM No comments:

Cool Japanese director, check out her commercials here, the "coke" spot is pretty good. link And she is also the creator of the han panda, a mutant panda cute thing.
Posted by woobot at 3:23 PM 1 comment:

Everyone wants an imaginary unicorn friend that they can call forth to smite their enemies. The Avenging Unicorn Play Set has everything you need to use the power of the unicorn to rid your life of irritations. Put the posable hard vinyl unicorn on a flat surface and then impale one of three soft vinyl figures included (businessman/boss, new age lady and mime). Click here to purchase.
Posted by woobot at 12:33 PM No comments: 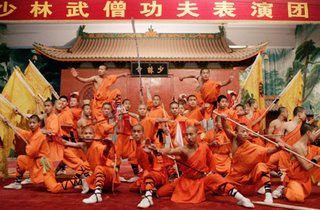 China's ancient Shaolin Temple is entering the age of reality TV with a show of its own. "Chinese Kung Fu Star Search" will invite viewers to vote for their favourite martial arts masters by text messages or through the Internet after each episode. "Regardless of nationality, skin colour or style, anyone who practises Chinese kung fu is welcome to take part," Xinhua said. The eight-month contest is aiming to knock the "Inner Mongolian Cow Sour Yoghurt Supergirl" show from the top spot in China's ratings. full story.
Posted by woobot at 10:34 AM No comments: 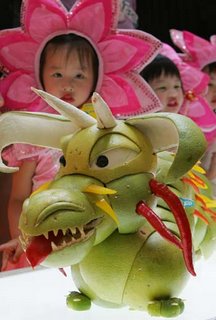 Yes! Earlier this week we had a chewing gum artist, and now we have a fruit sculptor! It seems Italian food artist, Paolo Pachetti is the master of the art of fruit carving (that just sounds silly). Check out his site here and go to his gallery section. Oh, what an apple can become in the hands Paolo.
Posted by woobot at 9:21 AM No comments: 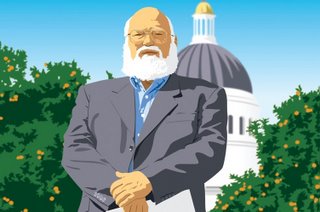 Vector works fans will like Arthur Mount's site. Here's a link, just click to the left on his "illustration" section, then select people, places or things. Looking at this stuff makes me want to see Scanner Darkly. Mr. Mount's link. via*drawn
Posted by woobot at 8:33 AM No comments:

All Men Are Brothers 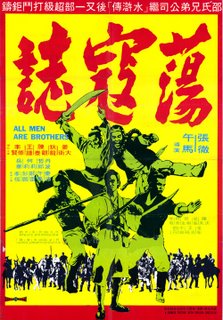 These posters rock, link.
Posted by woobot at 3:35 PM No comments:

This is pretty wild (or sticky), Canadian artist Jason Kronenwald creates his work utilizing (chewed) chewing gum. He's got a cool site that shows his progression in the gum medium, be sure to check out no. 1 in the series. It's interesting to watch the development of his gum pieces. Here's what Jason writes about his work "Each Gum Blonde is 100% chewed bubblegum on a plywood backing. No paint or dye is used. The colour is inherent to the gum - the mixing of the colour takes place in the mouth during chewing using an endless variety of flavours made by an endless variety of companies." link via*drawn.
Posted by woobot at 10:54 AM No comments:

Yes, executive producer Johnny Depp, will release a tribute album of sorts to... Pirates! This sounds dumb and laughable, but the talent attached to the project is impressive, Tom Waits, Nick Cave, and Bono are among the vocal pirates. I don't think the disc will be an official tie-in to the movie, I think it's geared to the true pirate enthusiast. Click here to read more. And in related news, I found this "top look alike" site, that has images of a guy doing a "Johnny Depp". What do you think? See any resemblance? link!
Posted by woobot at 8:36 AM 1 comment:

Here's a strange flickr set of a doll taken in different "high fashion" poses as if she were a real model. link.
Posted by woobot at 4:45 PM 1 comment: 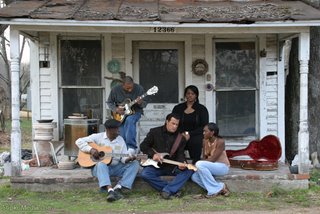 Wow, where to start. Okay, first off, Steven Seagal has a band? I thought those pictures of him holding a guitar were just publicity shots. And secondly, he's the only white guy in his band... okay... and third, the title of his ablum is "Mojo Priest". I've got to stop, really, I'm going to pee my pants. But then there's this... as reported earlier on woospace, Seagal also has an energy drink, called Lighting Bolt! And get this, click here to read a band rider for Mr. Seagal's backstage requests, and the first request on the list is... Red Bull! See, you can't even get Steven Seagal to drink his own energy drink. Sheesh!
Posted by woobot at 12:54 PM 4 comments: 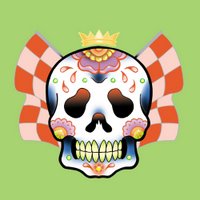 Here's some cool art from artist, Sunny Buick. Sunny has a great "tattoo" influenced style, and a great painting called "Godzilla Rock". Check it out here.
Posted by woobot at 10:24 AM No comments: 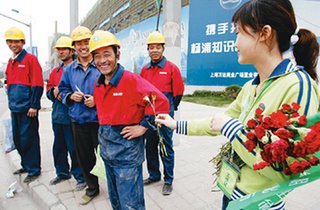 Love this, many of you know, traffic laws both for vehicles and pedestrians are hardly observed in China. But with all those new cars, and the world's press preparing to descend on China in 08, it's time to encourage people to follow the rules. And if they don't, public embarrassment always works... "A volunteer in Shanghai's Yangpu District presents a carnation to a construction work as a token of appreciation for using a pedestrian crossing. Hundreds of volunteers in the city took part in the activity on Monday to promote awareness of traffic rules. Starting from that day, the traffic authorities said, they would shoot pictures of offenders caught jaywalking and post the photos at their work units or in select public places."
Posted by woobot at 8:36 AM No comments: 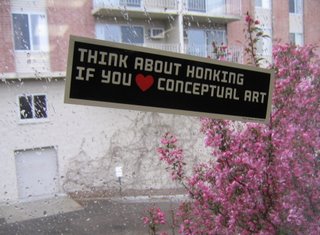 Okay, I was never the biggest Guns N Roses fan, but come on, who doesn't like "Appetite"... Anyway, "Chinese Democracy", perhaps the world's worst titled album may finally be on it's way. Here's a theory, maybe Axl decided on the title "Chinese Democracy" because he knew he would take over a decade to put this thing out, and that Chinese democracy would still be a fictional concept. Anyhow, read here about the much touted Axl Rose/GnR comeback tour and "album" to follow. But, don't believe the hype.
Posted by woobot at 12:13 PM No comments: 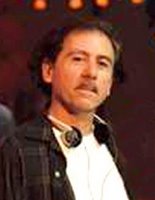 I have seen "Art School Confidential" and while not a perfect movie, it is very funny with great performances. Check out this AICN interview with director, Terry Zwigoff. I saw the movie at the Arclight and Terry spoke afterward, actually, we were told that the Q and A would be used for the DVD. Anyhow, a lot of the ground he covered that night is in this interview. link
Posted by woobot at 10:03 AM 2 comments: 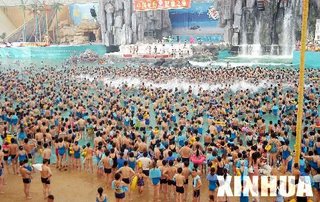 In China, people are ending their week long May Day vacations. But in a country with over a billion people, at some point you have to ask yourself, is it really a vacation or purgatory? Click this link for more images of Chinese "vacationers".
Posted by woobot at 9:18 AM 1 comment: 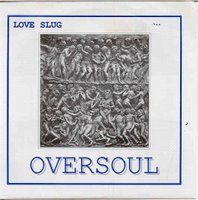 Whoa, a blast from the past coming to me from "down under". As some of you may know, in high school, I was in a punk band called "Love Slug". Now, some guy in Australia is selling our first and only vinyl recording on ebay. I hadn't seen the cover to that ep in so long. I think we were trying to go for a "classic" look with that cover, if I remember correctly the cover image was of a relief carving from Dante's Inferno, an odd choice for a bunch of seventeen year olds in a punk band in suburban Maryland. See the ebay listing for yourself. I still stand by those songs, they rock!
Posted by woobot at 9:03 AM 10 comments: 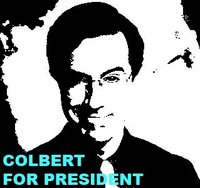 By the way, I know this happened last week, but can I just get a "Colbert for President!" Hells Yeah! Mr. Corbert rocks hard, balls of steel I tell ya. Be sure to check out his Onion Interview and visit his myspace profile here! Thank you Steven! Colbert 08.
Posted by woobot at 8:00 PM No comments: 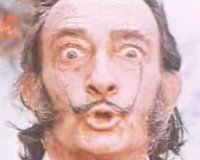 Here's a link to a TV commercial Salvador Dali did for a chocolate bar, Dali link.
Posted by woobot at 5:34 PM 2 comments:

I figured I'd stay on this cartoon thing and post one more, pretty funny "re-mixed" He-man cartoon called the "Skeletor Show" (a day in the life of the most evil man on the planet).... Check it out here. via*boing boing
Posted by woobot at 11:49 AM 1 comment:

Ok, so researching my James Hong piece, I came across this great fan site for Big Trouble in Little China, and found these awesome fan-made "Big Trouble in Little South Park" episodes. They are great, and worth checking out. Click here!
Posted by woobot at 10:32 AM 3 comments:

Pittsburgh has been having a good run lately, what with the Steelers and now local hometown boy made good, Jeff Goldblum returning home to perform the role of Professor Harold Hill in a stage production of "The Music Man". While doing so he also made a "documentary" where Jeff plays himself, an eccentric actor who returns to his hometown to star in a local community theater production of "The Music Man". This film sounds weird and interesting to me, as Jeff is generally zany. Read more about it here
Posted by woobot at 9:20 AM 1 comment: 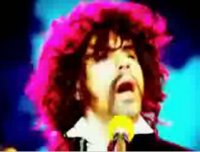 Have you seen the new Red Hot Chili Peppers video? If not, it's worth checking out. I haven't followed these guys in a while, but this video is great, as the Peppers spoof rock acts through the ages, including themselves. Also, I saw these guys last night on SNL and they rocked it. Check out the video here, Rock On!
Posted by woobot at 4:49 PM 2 comments: 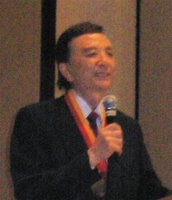 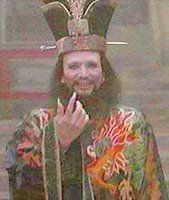 Last night, as a guest of Chinese actor Jack Ong, I attended The Spring Banquet of The Chinese Historical Society of Southern California. The banquet paid tribute to Mr. Ong and his fellow Chinese American actors living in L.A. Jack and I met on the set of "Art School Confidential" during the filming of the cermaics room scene. I will never forget meeting Jack, and watching him get into character as the crusty Professor Okamura, a burned out art teacher. Jack is also in another recently released film, the highly acclaimed, "Akeelah and the Bee". In "Akeelah" Jack plays an encouraging "Korean" grocer.

Also at the banquet, I got the opportunity to meet Mr. James Hong, the baddest Chinese wizard ever to fight the Wing Kong in Big Trouble in Little China. Mr. Hong played the role of Lo Pan in John Carpenter's classic tale of an arrogant truckdriver who stumbles upon a dangerous and magical Chinese underground realm. I introduced myself to Mr. Hong, and got to talk to the "ten-foot tall roadblock" himself (although he was a bit preoccupied, in search of his "goody" bag). But he and the other honorees were well received all night and I had a real blast, thanks again Jack!
Posted by woobot at 1:45 PM 3 comments: