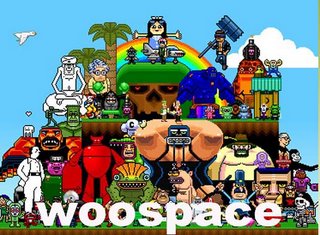 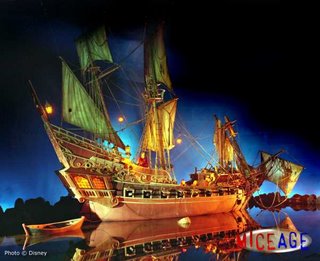 Whoa, over at Mice Age, there's a posting with sooo much new Disney info. Man, is that park ever evolving. Anyhow, it's got scoops a plenty, including an awesome idea for Space Mountain which we may never see, New pirates Updates - with the big revelation that Bruckheimer won't allow the Black Pearl's likeness to be used in the "Battle Scene" (replacing the Wicked Wench, shown here), And the latest info on the Nemo ride in the submarine lagoon, Plus a whole slew of other Disney "behind the scenes" info. Click here to read all about it. (via*miceage)
Posted by woobot at 11:59 AM 2 comments: 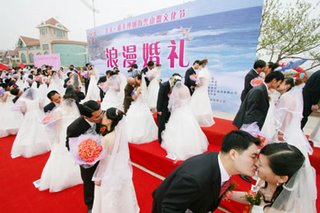 Aww... Nothing says eternal love and romance quite like a group wedding. "Bridegrooms kiss their brides at a group wedding ceremony at a beach in Qingdao, Shandong Province May 4, 2006. Sixty-six couples chose to tie knots at the ceremony. It is reported these couples are from different parts of the country, including Shanghai, Nanjing and Shandong."
Posted by woobot at 9:14 AM No comments:

For those that don't know, Gwar, is the brainchild of Virginia art students turned Rock Gods (think Kiss meets Live Action Cartoons). Anyways, here is a bizarre pairing, as Joan Rivers interviews Gwar's singer and bass player. I'm not sure which is odder, Gwar or the fact that Joan had a talk show! link and if you need an introduction to the band check this out.
Posted by woobot at 8:45 AM 4 comments: 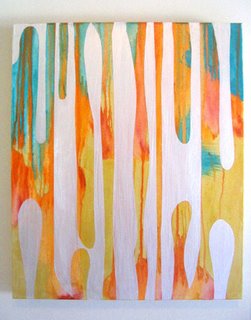 Yesterday I turned in my painting for this year's "Venice Art Walk and Auction". The showing and auction will be held on May 20th at Track 16 and Berman/Turner Project at Bergamont Station. It's free to check out the art from 11:00 am to 4:00 pm. and you can also bid on the art and support a good cause (The Venice Family Clinic). I participated last year and my painting was auctioned at $450 and I donated all proceeds to the clinic. I'm hoping for another successful year this time out. Hope to see you all there. For more info click here.
Posted by woobot at 3:28 PM No comments:

Changing course here... Wanna know what the critics think of this summer's batch of movies, click here to read predictions on this summer's potential hits, flops, and sleepers!
Posted by woobot at 1:05 PM 1 comment: 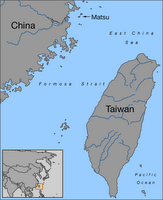 Now, that the President of China, Hu Jintao, has finally been formally greeted by the white house, it seems the first effects of his visit are starting to show. On a quest to embarrass and bully Taiwan, China has obviously put the hard lean into Bush to not only not "officially recognize" Taiwan, but also to ignore the sovereign democratic island all together. Chen Shui-bian, Taiwan's president, intended on an overnight stay in New York on his way to Paraguay. But he was denied the request and told he could refuel in... Alaska! (which he promptly declined) Are we insane.... Bush talks about how important it is to promote democracy in the world (even willing to go to war in the name of it) and we diss a potential democratic ally like Taiwan, all because the world's largest COMMUNIST country tells us to. That doesn't fly in my book, it is utterly unjust and outrageous! "China's suppression against Taiwan has gone from bad to worse," said President Chen Shui-bian, "China should not push Taiwan into a corner, leaving Taiwan without a living space in the international community." Click here to read about this recent low point in Taiwanese U.S. relations. And here to read an outstanding editorial about the importance of including Taiwan in the U.N.
Posted by woobot at 12:30 PM 2 comments: 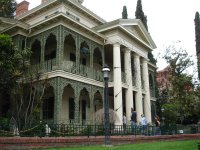 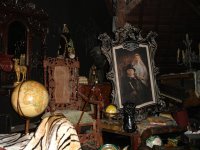 There's a lot of changes happening in the Park, I still want to know what's going on with Pirates, but in the meantime, news of Haunted Mansion changes are coming in. Apparently the "attic" scene was revealed yesterday. "Early (Wed.), the effects were switched on in the Mansion and the portaits of the "Black Widow" Bride's former husbands revealed. The portraits all show the bride, "Constance," with her former husbands, each of whom lose their head on the changing portrait with an eerie "swoosh!" Just before the Doom Buggies exit the attic, the new, glowing bride appears, taunting you with coy statements such as "'Til DEATH do us part..." and suddenly raises her bouquet, which becomes a gleaming steel axe..." Click here to look at images from the refurbished scene. And here to read an account from an actress who auditioned for the part of the "black widow bride!".
Posted by woobot at 9:53 AM 1 comment: 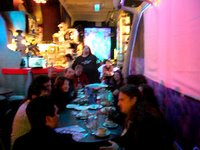 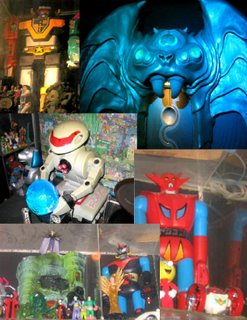 I've got a restaurant recommendation: Nova Express Cafe @ 426 N. Fairfax (across from Canters). If you're in LA and you've never been to Nova Express, you should check it out. The owner is a big sci-fi fan and the whole place is done up in black-light sci-fi goodness with a starbridge projection screen, giant Cthulu costume, plasma balls built into the tables, and an incredible action figure collection (including Shogun Warriors!). The place serves a variety of drinks along with a nice selection of sandwiches, salads and the ever delicious... Cosmic Pizza. The dough they use for the bread and pizza is really good. I tried the Green Star, which is a yummy pesto pizza. Here's a link with a little more info link
Posted by woobot at 8:28 AM 1 comment:

Honest, this Saturday go by your local comic store and get free titles! Click here to find a store near you. I guess this is how the comic industry plans to hook young readers early, not a bad idea.
Posted by woobot at 12:31 PM 1 comment:

Chinese man buys Czech fighter jet from an American on eBay. The man paid $24,730 and plans to use it to decorate an empty space at his offices. Only one catch, how do you ship a friggin fighter jet to China? Read the whole story here.
Posted by woobot at 10:11 PM 1 comment: 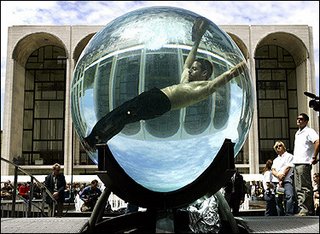 Perhaps you've heard, but Mister Magic aka "publicity stunt artist", David Blaine is at it again. He currently is submerged in a "human aquarium" for the rest of the week at New York's Lincoln Center Plaza. Click here to read more about Blaine's weeklong underwater stay and his attempt at breaking the world record for holding his breath.
Posted by woobot at 9:43 PM 1 comment: 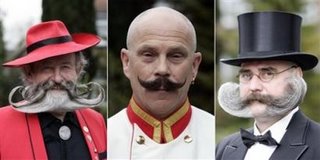 Everyone in LA, please remember that this Saturday is the SMG show @ Western Project in Culver City. This show will be great, so don't miss it! "Western Project is proud to present the third solo exhibition of paintings by Las Vegas artist, Sush Machida Gaikotsu. This new body of work is heavily influenced by two of Japan's historical painters, Jyakuchu Ito and Okyo Maruyama. Reinterpreting late 18th century Edo classicism of these two masters, Sush has infused traditional Japanese imagery with a sense of global culture." To see more SMG work, click HERE
Posted by woobot at 11:05 AM No comments:

Believe it or not, this image was taken at the first annual "Sober Day USA", which is the brainchild of former O.J. Simpson defense attorney, Robert Shapiro. It seems Shapiro's son died after taking an "ecstacy" pill, so he created a non-profit in his son's honor. "The idea, Shapiro said, is to get people talking about drug addiction." Well, I guess he invited the right people because those attending sure do know a lot about it. Some of those in attendance at Monday nights no-alcohol, no-drug, celebrity-laden party at the Standard Hotel were Charlie Sheen, Paris Hilton, Tom Arnold, Ted Danson, Eva Longoria, Diana Ross, Nicole Richie, Nick Lachey, Lindsay Lohan, Brittany Murphy, Justin Timberlake, and Cameron Diaz. The bar at the party was serving "mocktails" such as the "Pom Pilot", made with pomegranate juice. It was also reported that Lindsay Lohan remarked how refreshing the "Pom Pilot" tasted, right before she used the fruity concoction to wash down a xanax and a two dexatrims. For images of the event go here and to read about how the first annual "sober day usa" came about go here.
Posted by woobot at 9:51 AM 2 comments:

More silly illustrations from Holland, with some bots too! link via*drawn
Posted by woobot at 9:09 AM No comments: 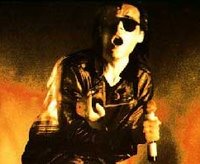 I love "You Tube", you can find all the old videos that you never saw... I found this classic Sisters of Mercy with Andrew Eldritch singing in a factory in India for the video of "Lucretia, My Reflection"... which is a great song. Check it out Here and if you liked that then you'll also want to see the video for Dominion
Posted by woobot at 10:09 PM No comments: 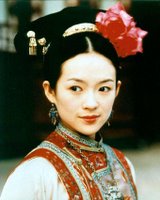 Okay, it's official Zhang Ziyi has returned her name to it's original Chinese spelling, after last year trying to "westernize" her name by calling herself Ziyi Zhang (which I thought was ridiculous) Anyhow, this story seems a little late but still kinda interesting. HONG KONG -- "Chinese star Zhang Ziyi says she would have liked a little hug of encouragement from Oscar-winning director Ang Lee while filming "Crouching Tiger, Hidden Dragon," but she never got one, Hong Kong media reported Monday. Zhang said she cried every day after returning to her room during shooting for the movie, released in 2000, because the work was so difficult, reported Apple Daily, a mass-market newspaper.She said she needed an encouraging hug from Lee, but he never gave it to her, the paper quoted her as saying. However, she said the director frequently hugged her co-star, Malaysian-Chinese actress Michelle Yeoh. Lee explained he didn't hug Zhang because she was only 19 at the time, the Ming Pao Daily News reported. "Hugging her would have been a little embarrassing," Lee was quoted by Apple Daily as saying." (AP) FYI... Zhang shouldn't cry too much, her "asking price" has been a half a million for the last several pictures, but after "Geisha" it is now a whopping five million a picture.
Posted by woobot at 1:05 PM No comments: 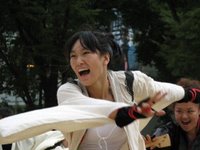 This is a sad and interesting tale of a Japanese women who apparently never grew up. At 43 she remained obsessed with her childhood idol and stalked him well after his teen idol days were over. She was destined to do jail time, but her father's tearful testimony saved the woman from jail. link
Posted by woobot at 12:35 PM No comments: 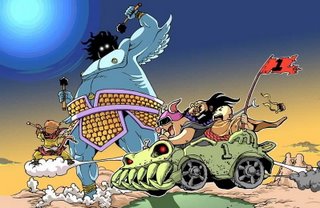 This site is in Chinese mostly, but it is a 2D and 3D art site with some cool galleries and enough English so that you can navigate your way around. Definitely some cool surprises inside, try the "original art" or "concept design" galleries. link
Posted by woobot at 9:15 PM No comments:

"The teachings of Grand Master Masaaki Hatsumi echo through my head as he entreats me to attack a blackbelted disciple with a practice sword. "Always be able to kill your students," he says. Chilling words from a shockingly fit 76-year-old man who bills himself as the world's last ninja..." lethal link and to visit the Grandmaster's site go here
Posted by woobot at 8:56 PM No comments: