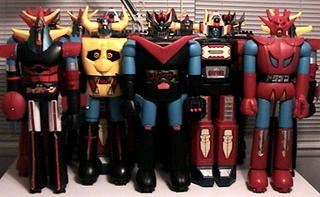 MORE ROBOTS!!! These are Shogun Warriors and if you don't already know, they kick ass!
Posted by woobot at 4:47 PM No comments: 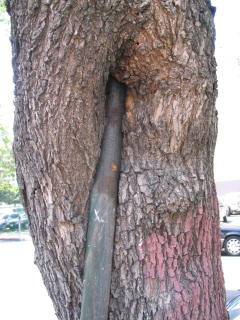 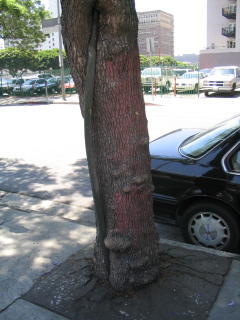 Apparently, Mother nature has a sense of humor too. It was reported yesterday in the LA Times that a disgruntled downtown Tree attacked a long time street acquaintance, parking sign no. 336. After several arguments in early June, the Tree decided to take matters in it's own hand and swallowed the top half of the sign. Allegedly, the sign had harassed the tree to point of it's breaking point. The Tree was quoted as saying to a parking attendant who came to investigate, "That's not all I'm going to fucking eat, step back asshole!"
Posted by woobot at 12:34 PM 1 comment:

Comedian, Dane Cook, has taken the "finger" to new heights. If you don't already know, it's the middle finger PLUS your ring finger...making "Superfingers". Try it out on a co-worker or someone in traffic. Please, note Su-fi, doesn't always mean super FU, it can also mean KICK ASS!
Posted by woobot at 9:21 AM No comments:

Is it true? Or is it a trick?
Reformed alt-rock legends PIXIES are planning to record their first album in 14 years.

The band’s frontman Black Francis has confirmed the band, who got back together last year to huge acclaim, are preparing to make their first studio album since 1991’s ’Trompe Le Monde’.

He told The Sun: “It's all hugs and kisses, I'm pleased to report.

"We have been discussing recording a new album lately. As happy as we are with the success of the reunion tour, we really want to make a record for the right reasons, whether it is successful commercially or not."

He added: "We would be satisfied if it played like our other records, never chart-topping but always in print."

Since the band got back together they have recorded two songs - ’Bam Thwok’ - which was rejected for the ’Shrek 2’ soundtrack and then released as a download-only single, and a cover of Warren Zevon’s ’Ain’t That Pretty At All’, which appeared on ’Enjoy Every Sandwich’, a tribute album to the late singer.
Posted by woobot at 8:47 AM No comments: 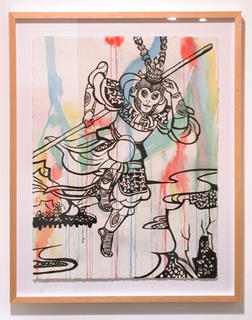 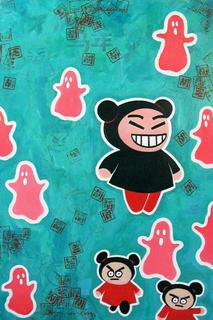 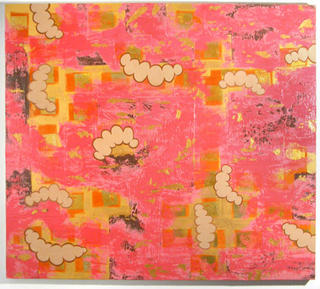 These are three very different works...The Pink one is called Motherboard and was shown in a group show here in LA, and apparently hung in a Doctors office for several months, but now its back with me. The Monkey King is part of a series I did from the book "Journey to the West", and the last one is called "Puccas"...because its of Pucca of course!
Posted by woobot at 5:27 PM No comments: 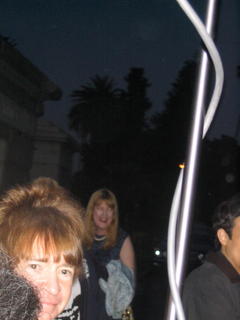 Last week I went to a screening of the Ramones, classic Roger Corman film, Rock and Roll High School. Anyway, Rodney Bigenhiemer was there...and this picture really captured him I thought, because he just sneaks into the picture. At the opening of the movie he spoke with an introduction that went something like, "The least respected man in Rock"...only to have the mike feedback like crazy when he started talking...so they took it away from him. And thats all she wrote for Rodney...
Posted by woobot at 5:22 PM No comments:

My good friend Jason Connel is making a great documentary about extras out here in Hollyweird....Jason and I met on a set doing background work (the preferred industry term) and this movie is going to be heartbreaking and funny. Well, I don't know if it will be heartbreaking, but it is if you're only making $54 dollars a day...At least the food is good, sometimes. Anyways, check out his site www.strictlybackground.com Check out the press realease, yours truly penned that!
Posted by woobot at 9:54 AM No comments: 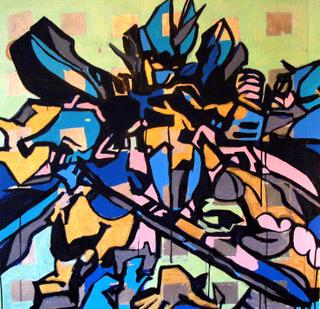 Posted by woobot at 9:41 AM No comments: