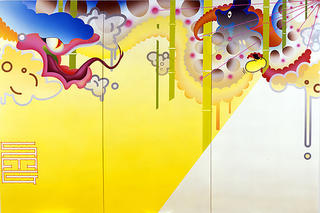 Sush is heavily influenced by the 19 th century wood cuts of Utagawa Kuniyoshi - for their eccentric imagery and humor. His work also integrates elements from the last 20 years of Pop culture, such as tattoo, extreme sports, skate and snowboarding graphics, high-fashion, computer imaging, etc. Blending traditional Japanese attitudes of image making and slick technologies of contemporary painting, the artist has made a body of work he defines as a super clean sublime .

All I know is these are slick, cool, and really gorgeous...
Posted by woobot at 2:38 PM No comments: 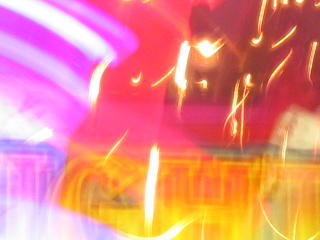 Illusions !
Posted by woobot at 1:25 PM No comments: 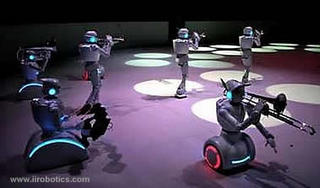 TOKYO - Toyota Motor Corp. said Tuesday it had made no decision yet on whether it would commercialize the humanoid robots it is developing. ''We're still just at a trial stage, having just set up a separate division to develop humanoid robots,'' a spokesman said. His comments follow a report in the Asahi newspaper that Japan's top automaker aimed to start selling robots that can help look after elderly people or serve tea to guests by 2010. Seiichi Sudo, a managing officer overseeing Toyota's robot division, has said he hoped to put the droid to use as a receptionist at some of the automaker's own facilities by 2010.
Posted by woobot at 11:50 AM 1 comment:

Employee of the Month 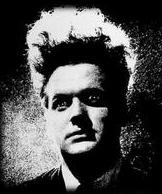 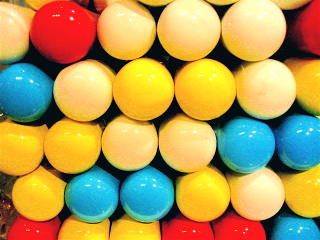 Here's another image from last weekend at the MOCA gift shop.
Posted by woobot at 4:46 PM No comments: 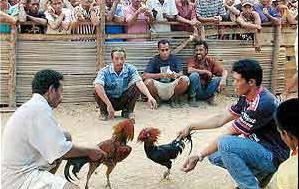 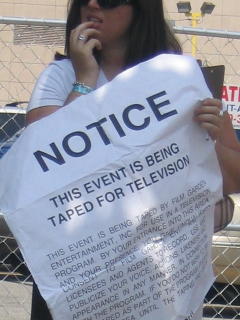 Los Angeles, CA - The network for men, Spike TV, is being taken to court by individuals who claim they never gave the cable channel permission to be filmed during a taping of the channel's new show "Friday Night-CockFight". The show's premise is to expose the underground cockfighting circuit in five major cities including: Los Angeles, Chicago, El Paso, Tucson, and Philadelphia. The show's host, Bonnie Fontana, lures would be cock fighting champions back to her trailer and then exposes them to her hidden cameras. The timing couldn't be worse for the controversial fledgling show, says producer Stan Lumber, "We we're hoping to get a slot after wrestling, but our sponsors are already cautious about us. This is really bad, our PA Lorena was suppose to have taken care of waivers. Somebody's gonna get fired." Sorry Lorena...
Posted by woobot at 4:14 PM No comments: 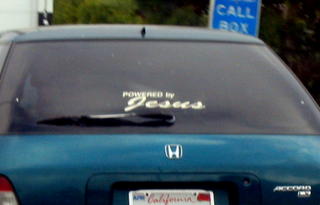 Los Angeles, CA- Due to recent increases in fuel prices, Marybeth Maddigan, has decided to shun gas stations altogether. Converting her 1998 Honda Accord into a Divine Automobile or DA, Maddigan is among a few individuals who hope to lower gas prices through faith and defensive driving. When asked about her incredible car she replied," Yep, this baby runs on 100% Jesus Juice, bonafide!"
Posted by woobot at 1:38 PM 2 comments: 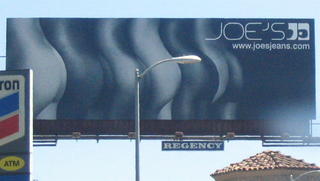 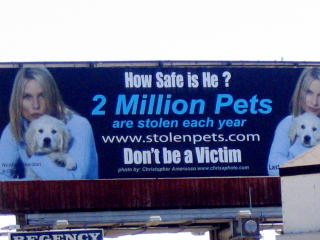 These two images are taken on Sunset Blvd. Both of which, I find quite amusing, and can't really see either taken seriously anywhere but in LA. The first image is for a Jeans Company, only it's pictures of women's asses--sans jeans! Talk about the emperors new clothes...and the second is for a pet security website...Wow!
Posted by woobot at 1:15 PM No comments: 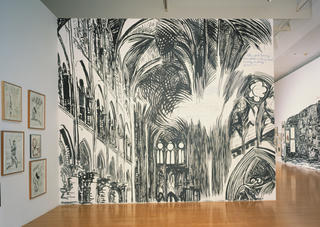 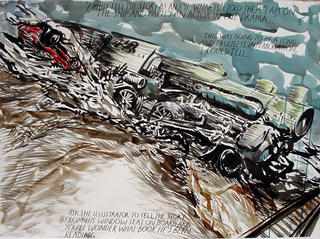 Raymond is a Los Angeles Enigma. Famous for his loose drawings of pen and ink, with text that highlights the absurdity of his images, Raymond's work plays like a mysterious oracle. His work has become quite popular as it has been used by many Punk bands (his brother was in Black Flag) and so he has created work for Black Flag, Sonic Youth, Foo Fighters just to name a few. In art school we would hear strange stories about Raymond, how he was reclusive, and couldn't talk about his work publicly, not that I really blame him. I have seen a few of his shows, and I am always struck by how diligent the work is. Most of his work is installed "salon" style filling up the gallery walls. It gives off the immediate impression that Raymond likes to draw, that making art has become something necessary for his sanity. And even his bad drawings become good in that context, which I guess is the great thing about dedicating yourself to something.
Posted by woobot at 8:37 AM No comments: 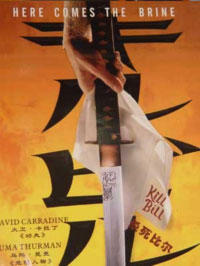 So, I think I'll continue to report on these wonderful Chinese additions to American films...or dare I say Bootleg DVDs--the design on the cases are a strange "pirate art" unto themselves. The DVD cases are all made in the same style, from hard glossy cardboard. Cheaply made, but professionally graphically designed. They're so uniform, you can tell they almost all come from one maker. What makes them art, though, are the mistakes: made by a genius dyslexican who flunked the TOEFL. English literacy in China is very low. A Chinese person picking up a movie to buy would not read the title, the quotes, the description, or the credits if they were in English. But any American movie case has to have English, right?
Posted by woobot at 8:15 AM No comments: 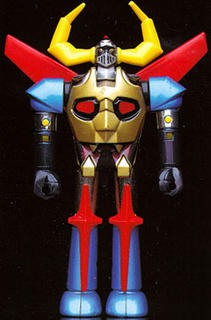 Posted by woobot at 1:04 PM No comments: 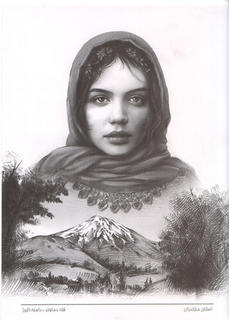 This time she has chosen Islam, and she is already the poster child for the religion, as shown on this beautiful illustrated Iranian postcard Boyfriend/Insane Scientologist Tom Cruise, of course, is disappointed with her decision to dump Scientology, but is "supportive of whatever she feels is right, because she is such an amazing woman."
Posted by woobot at 11:36 AM No comments:

Researchers at University of Tokyo have developed R Daneel, a humanoid 60-kilogram robot that kicks up its legs and rolls back onto its shoulders to gain the momentum it needs to rock up onto its feet and into a crouching position. Unlike most humanoid bots, it is designed to embrace a lack of constant control and instead follow the trajectory determined by the weight and shape of its body during the rocking motion, until it lands square back on its feet.
Posted by woobot at 11:21 AM No comments: 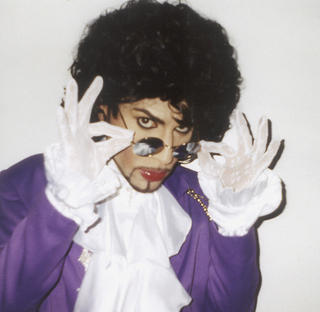 Los Angeles, CA- Paula McKlee filed a lawsuit yesterday against her former employer, Comcast cable, citing that she had been harassed by coworkers for her obsession with the rock legend, Prince. Ms. McKlee has been a long time Prince fan, devoting herself not only to Prince but also his band the revolution, and later to the New Power Generation. Last week Ms. McKlee was fired for coming to work dressed as her alter ego, "Princess". In a comment her lawyer released, she said, " I felt betrayed, because everyone in the office knew about "Princess" and they all encouraged me to dress up. But after I did, they wouldn't stop making fun, they also had the audacity to say Musicology sucked, it just shows how moronic they all really are."
Posted by woobot at 10:12 AM No comments: 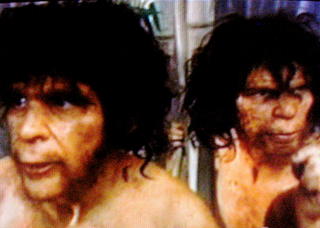 La Paz, Bolivia- Nestor Brio and Enrique Suarez, two Bolivian farmers have been arrested for terrorizing tourists on a Pampas tour. The two men reportedly broke into a parked tourist bus, and hid in the bus's storage bins. During a brief stop, the two men sprang out of hiding and attacked a German family, and two dutch women. The men seemed unable to operate a stolen i-pod and stopped to receive instruction from an American youth. Both men were apprehended when found sitting in a local cantina, each with one headphone in an ear, listening to rapper 50 cent.
Posted by woobot at 8:52 AM No comments: 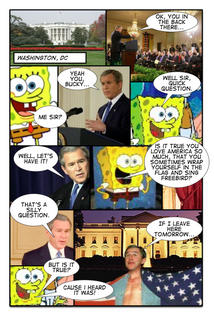 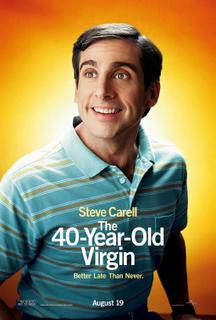 The 40 year old virgin starring Steve Carell is a great comedy. I think I smiled for at least an hour straight. The title might imply, lame sex comedy, but there's more depth to the characters than one would imagine. Very raunchy in places, but definitely a smart comedy. Plus, it's good to see a new leading comedy figure that is not Will Farrell or Jim Carey. Steve Carell is the next Peter Sellers, watch and see.
Posted by woobot at 3:25 PM No comments: 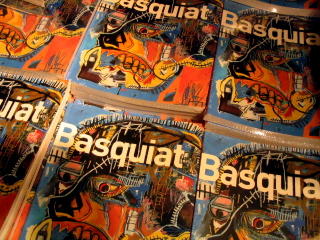 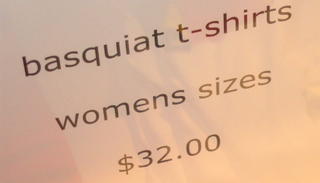 This weekend I checked out the Jean-Michel Basquiat show at LA's Museum of Contemporary Art . I have to say, that before I went to art school I was a big fan of Basquiat's. I really connected with his fuck the system ethos and liked his non-traditional way of making paintings. Plus, the movie was pretty good too. But I have to say, that after really getting to know this artist's work, and the period the work came out of (NY 80's art scene), I was hardly excited for the show. I figured it would be another bombastic exhibition meant to bring in the tourists, and the show does that, but it also plays right into the Basquiat notion of self promotion. The museum has put together a lovely line of Basquiat tote bags, dvd's, and t-shirts ($32 = Art fans are suckers?). The show is expansive, but honestly I was more statisfied with the MOCA's permanent collection which the Basquiat show empties out to. I do believe that Jean-Michel was talented, or at least smart enough to enjoy getting stoned and making weird stuff. But as a whole, his paintings, and especially his drawings begin to work against him, they begin to show his lack of development and his copious reliance on the work of Cy Twombly and Sigmar Polke. I never thought I'd say this, but the best thing to ever happen to Basquiat was when he started having other people make his canvases, and perhaps his work too?
Posted by woobot at 1:59 PM No comments: 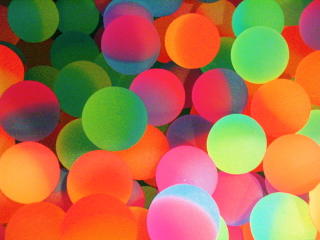 This is an image I took over the weekend. Yeah!
Posted by woobot at 1:53 PM 1 comment: 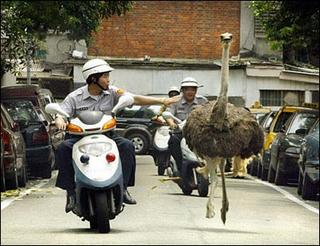 Taipai, Taiwan - Chaos ensued this morning on the set of Donald Trump's Chinese version of The Apprentice‚ after the first contestant was fired. The contestant, Linda Chang, submitted an application claiming she held an MBA from the University of Beijing and 3 years employment with Coca-Cola. When this was found to be untrue, Ms. Chang was fired by Mr. Trump. Upon being fired, the contestant made repeated personal threats against Mr. Trump, released an ostrich being used for one of the shows challenges, and destroyed an excess of $75 worth of office equipment, finally exiting the building without thanking Mr. Trump for the experience. Rich Wang, another contestant in the first boardroom meeting, admitted that she was a poor choice for the show, that she failed to give any direction, and was "a messy bitch." - M.D.
Posted by woobot at 8:15 AM No comments: