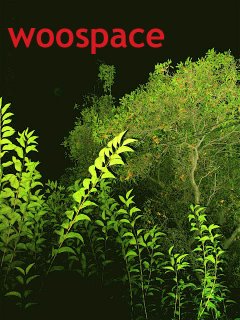 Posted by woobot at 2:21 PM No comments: 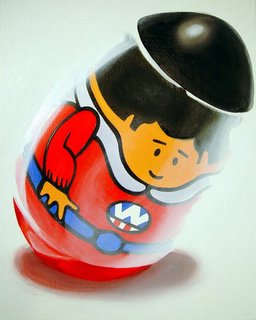 Painter of Weebles...and other stuff. here
Posted by woobot at 7:38 AM No comments: 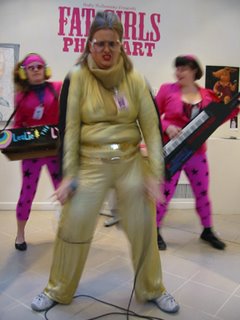 Good News for the Bedazzaled...Leslie Hall is an art school student who loves her Bedazzler...she even has a kick ass band that sings the praises of the bling machine. Check out her site here and be sure to watch her video at the bottom of the page. Rock out!
Posted by woobot at 7:21 AM No comments: 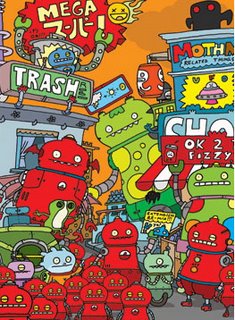 Sun-Min has just completed work on her 9th children's book published in Korea and David's animated TV series, Little Bony, produced by Sony Creative, reaches out with its positive message and �"can do�" themes to over 8 million children a day in Japan. Sun-Min and David�s newest collaboration, Pounda, featured on tee shirts, limited edition prints, and cel phone downloads is the latest of the duo's creations to be translated into luscious rotocast vinyl. Go here for all things UGLY!
Posted by woobot at 11:21 AM No comments:

Thanks to Jim Smash, we can all make our own Flipp'n animated drawings. Create one and leave link. I didn't get a chance to do one yet...but they're cool! flip here Here's an explosive example!
Posted by woobot at 11:15 AM 2 comments: 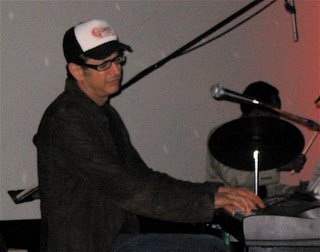 I decided that Mr. Goldblum's hands are really important to him. First off, their giant mits, secondly watch him act, he's always acting through his hands. And yes, he plays a mean keyboard, and as you can see, he get's Jazzy...
Posted by woobot at 11:01 AM No comments:

Yesterday Once More, Again and Again... 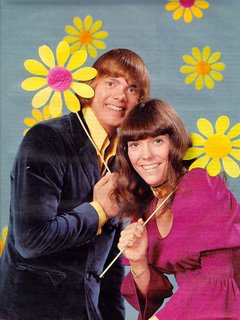 I recently came across this article, which reminded of the horrific musical tastes in China:
Little did Richard Carpenter know when he wrote a song for his sister, Karen Carpenter, thirty-two years ago, it would still be at the top of the Charts in China . Coming up this week, Yesterday Once More will have been at the top of China’s Top Twenty Charts for a mind boggling 1,664 weeks!!! (That's insane)

“It’s an honor,” says Richard Carpenter. “I mean China has a lot of people, and a good portion of them seem to really love our music. I don’t know if that means that we had good taste then, or China continues to have good taste now? I’m happy, although I can’t say we’ve ever received a penny in royalties from that part of the world—a penny or whatever kinda crazy ying yangs and yick yaks they pay with over there. Anyway, it does feel good to be appreciated. Do they know I released a solo album back in 1987? It should be a hot new album there by now.” At one point I think Titatnic's "My Heart Will Go On" was up there on the charts, but Yesterday Once More is solidly at #1...FOREVER. Don't you like Richard's description of the Yuan? Nice.
Posted by woobot at 9:21 AM 1 comment: 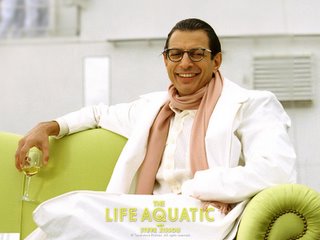 I went to look up Jeff Goldblum and found out that there are a lot of Goldblum fans out there...and some of the stuff I found is hilarious or creepy, depending on how you see it. Banzai!
Posted by woobot at 2:57 PM 1 comment:

Check out Opera Dude....here.
Posted by woobot at 9:14 AM No comments: 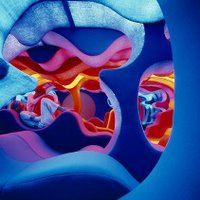 It happening again, another major art institution is singing the praises of the psychedelic and LSD and their effects on the art world. The Schirn Kunsthalle in Frankfurt will host, Summer of Love, curatrated by the Tate's Christoph Grunenberg. I'm sure the show with works by Warhol and Vernor Panton is an attempt to rival L.A.'s own experiment with Ecstacy. Too bad too, because the work most often stands on it's own, without the acid.
Posted by woobot at 8:52 AM No comments: 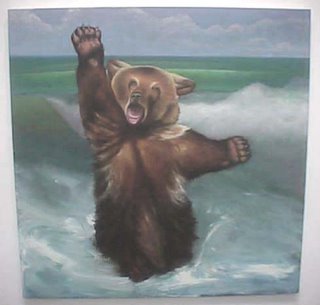 Do yourself a favor and read about this BEAR who lived with a father and a son for two years, and then (time permitting) click on the two headed turtle picture and you will be treated to a vast array of bizarre photos. Bear painting by Tim Ebner (the Ebner link is a great interview/studio visit with a fantastic artist*recommended!)
Posted by woobot at 8:05 AM 3 comments: 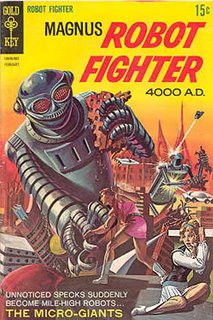 Posted by woobot at 7:59 AM No comments: 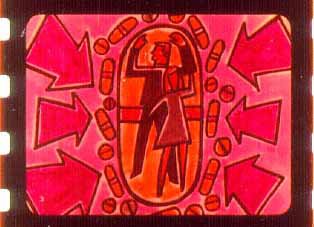 This a groovy scan of a 70's filmstrip all about Drug Prevention: "Glue Sniffing and Pills". Turn off the lights and wait for the
BEEP
Posted by woobot at 7:54 AM No comments: 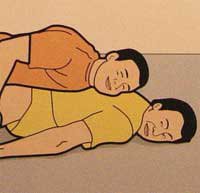 I'm not quite sure what to make of these illustrations...I think this might be a Chinese pamphlet on gay sex (ya think?), click here it gets better, "One day you'll thank us?"
Posted by woobot at 8:59 AM No comments: 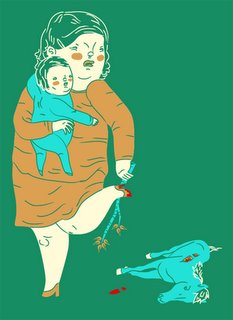 Ken goes to art school in Canada. He's got some nice illustrations, and even has some designs for t-shirts. here
Posted by woobot at 8:56 AM No comments: 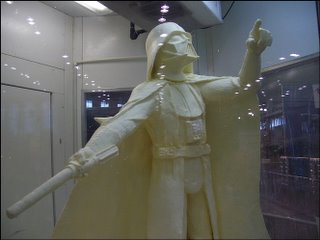 The Tulsa State Fair's Butter Sculputre....now, that's a lot of butter! Yoda Butter
Posted by woobot at 8:43 AM No comments: 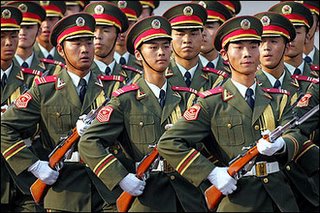 "China’s military is developing capabilities for “no-contact” combat operations based on information operations. China announced last year in a defense white paper that “informationized” military operations were its key priority. No-contact warfare involves indirect attacks against an enemy from beyond the line of sight. The goal will be to see the enemy before the enemy can see you." Doesn't sound good for cross strait relations. Obvioulsly, these soldiers are preparing for a "no-contact" drill.
Posted by woobot at 8:09 AM No comments: 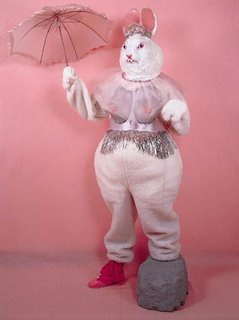 This is really cool, the LA Weekly is doing their first "state of the art" issue, which breaks down some of LA's finest artists in residence as well as some of the galleries, people in the know, and curators. I highly recommend reading this for anyone who wants to know what's going on in the LA art world. And to think I had to pay big bucks for this kind of education, and here it is free! Enjoy!
Posted by woobot at 11:57 AM No comments: 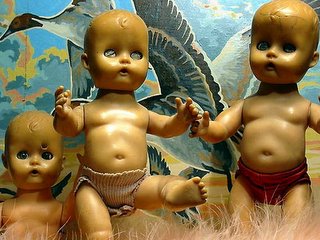 This is a flickr stream of a great toy collection. Really cool creepy fun stuff. Dig it
Posted by woobot at 9:22 AM No comments: 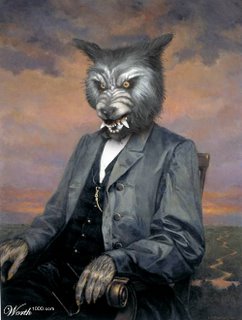 I love this, classic art and classic movie monsters! Happy Halloween. check it
Posted by woobot at 9:04 AM No comments: 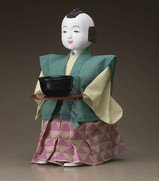 An example of Japan’s first robot is the fascinating Karakuri: Tea Server, designed almost four centuries ago and today remains a remarkable example of Japan’s keen sense of robotics. What does it do? This Kabuki-styled doll approaches surprised guests with a full teacup on a tray; it stops walking when the teacup is taken, waits quietly, bows, then slowly turns around, smoothly scooting away with the empty teacup on its tray...
read more
Posted by woobot at 8:51 AM 1 comment: 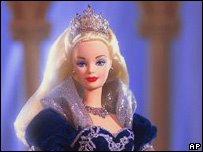 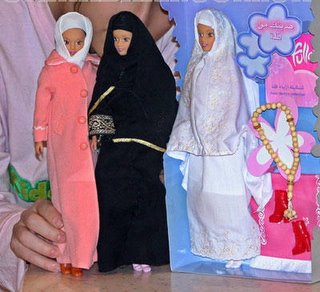 Fulla, a Barbie-like doll with what its creator calls "Muslim values" is a best seller in the Middle East, and comes with an all important accessory, a prayer mat.
read article
Posted by woobot at 8:24 AM No comments: 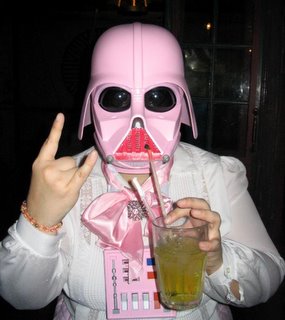