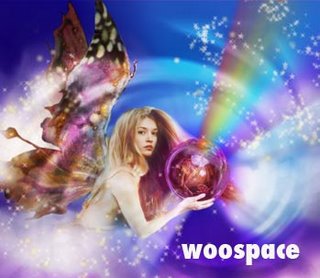 Posted by woobot at 4:49 PM No comments: 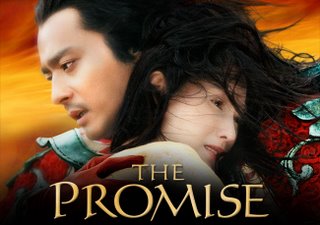 Going on a theme here, check out the trailer for this movie, it looks great. link
Posted by woobot at 4:46 PM No comments: 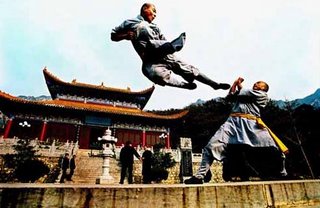 Okay, here's another slide show, but this time it's filled with bad ass pictures of Shaolin monks showing off their amazing skills, you have to see it to believe it. That one guy is doing a hand stand, supporting himself by his fingers tips only! wow!
Posted by woobot at 9:55 AM No comments: 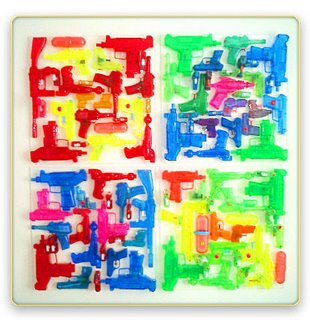 China Is for Lovers 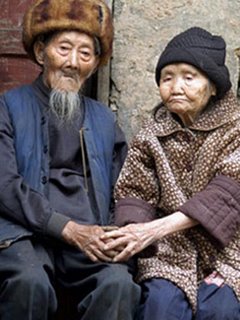 This one's for all the romantics out there, this couple both in their Hundreds! Have been married for nearly 90 years... Check out this cute slide show of them, it takes a moment to load, but hey, they're old and cute... its worth the wait. And check out grandpa smoking... still a bad ass. link
Posted by woobot at 9:31 AM No comments: 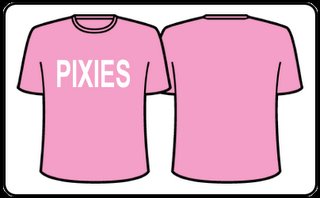 I was thinking about the Pixies today, and wondered about that "new album" I have heard rumored about. After doing some research, i found this article printed in today's Reuters UK... Unfortunatley, it says that the Pixies may never get around to doing that post trompe Le Monde album. They are touring Europe this summer, but their future after that is uncertain. article Also found this at a Frank Black fan site.
Posted by woobot at 1:55 PM No comments: 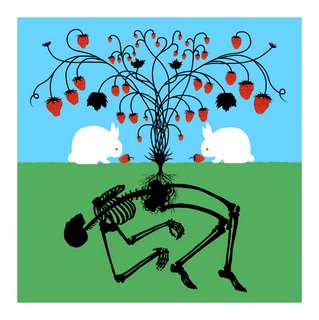 Great find, thanx Jennifer. Artist, Dan McCarthy's website has some really nice prints that are both gothic and serene. Treat yourself, and have a look see.
Posted by woobot at 1:18 PM No comments: 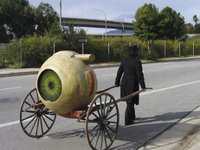 Interested in the creation of the camera obscura? Artist, Stephen Berkman, has a great site that is filled with mysterious images that chronicle the development of humankind and the spirit world, I think. You can decide for yourself, here.
Posted by woobot at 12:00 PM No comments: 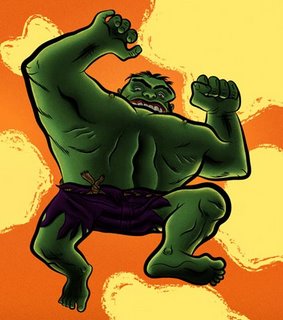 I have posted Dave Curd's work here before, but there are some new illustrations up on his site, and it's really really good. So take a look.
Posted by woobot at 9:33 AM No comments:

Man With The Screaming Brain 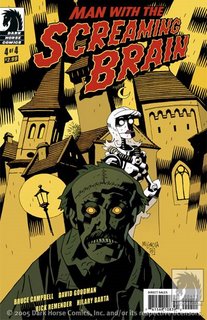 Man With The Screaming Brain is a film that came out last year and stars, "B-movie megastar Bruce Campbell of Evil Dead, Army of Darkness, and Bubba Ho-Tep fame". Now I have not seen this movie, but at work on Tuesday, I met the co-writer of this film, David "Goody" Goodman. Goody is a great, totally unpretentious guy, he explained to me how he wrote and produced the film with Bruce and was proud of it as a B-horror flick. Then he said Dark Horse comics puts out a comic of the movie that was a "Dirctor's Cut" version of how he and Bruce envisioned the film if they hadn't been on such a shoe string budget. [**geek moment**, Then he called Bruce on his cell to tell him that I had found out about the Evil Dead remake online, from my pal Jimsmash and that it was on imdb... Bruce already knew] Anyway, click here to see pages of the book and here to read about how the comic book got it's start and how they got the Hellboy creator involved.

Man with the Screaming Brain tells the story of a wealthy American businessman determined to exploit the crippled economy of a former Soviet state torn between communist roots and capitalist greed. But Campbell's character soon finds himself in the grip of a mad scientist with a twisted brain-transplant scheme worthy of Dr. Frankenstein.

So if you get a chance rent this one, I know I'm throwing it in my Netflix... There are some interesting and honest reviews on the imdb link.
Posted by woobot at 8:29 AM 1 comment: 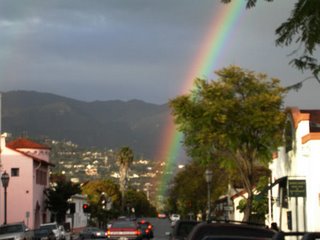 link
Posted by woobot at 8:16 AM No comments: 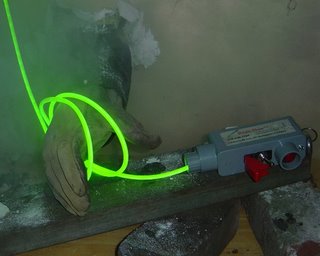 Over at MAKE:blog they have a list of the top 25 inventions of 2006... Shown here is "The Resc-hue Lite Line" a waterproof, fire-resistant light that is based on electroluminescence principals and provides 360-degree lighting when firefighters, divers, the military or anyone in a low light environment needs it most.
Posted by woobot at 11:03 AM No comments: 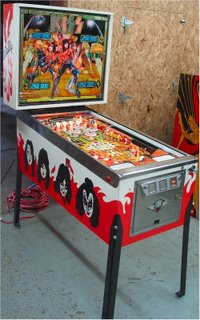 Wow, I would love to buy this machine, I was really geeking hard when I found this. If only I had sixteen grand and could buy this baby... It's not so much that I like Kiss, it's just that I love Pin Ball, and this is the ultimate machine! I remember playing this game on the boardwalk at Rehoboth Beach, DE. For more awesome details on this machine click here!
Posted by woobot at 10:47 AM 1 comment: 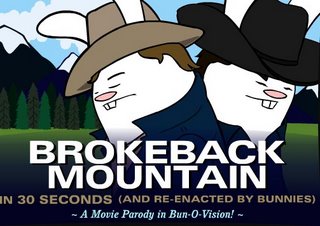 If you havne't seen this... its not as good as the Shining parody... But nonetheless, its bunnies! link
Posted by woobot at 10:28 AM No comments: 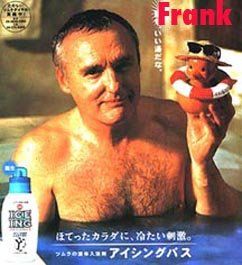 Remember Frank? Not like this you don't. Check out this "faux trailer" that re-cuts Blue Velvet into a wacky comedy about a difficult and zany Dad, known as Frank!
Posted by woobot at 10:04 AM 1 comment: 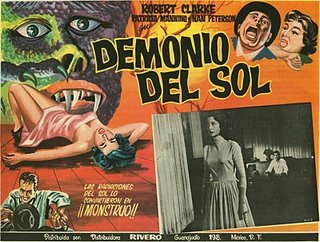 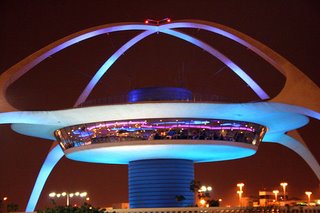 Found this Flickr set, some nice pics in here
Posted by woobot at 4:54 PM No comments:

Doctors are baffled by a woman who remembers even minor details about virtually every day of her life. Read More.
Posted by woobot at 4:31 PM No comments: 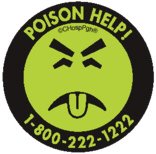 Mr. Yuk the internationally recognized poison prevention symbol, turns 35 just in time for national Poison Prevent Week. He was created at the Pittsburgh Poison Center (PPC) at Children’s Hospital of Pittsburgh in 1971 to educate children and parents about poison prevention and poison control centers, and has since been adopted as a symbol recognized around the world. For more read here... link
Posted by woobot at 4:21 PM 3 comments: 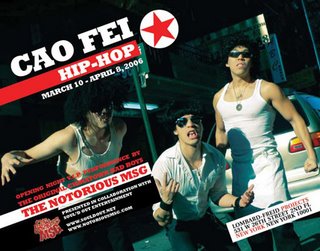 Cao Fei is a pretty interesting artist with an extensive website, there are some gems in there, so be sure to look around, and if you're in NY, check out his show.
Posted by woobot at 12:00 PM No comments: 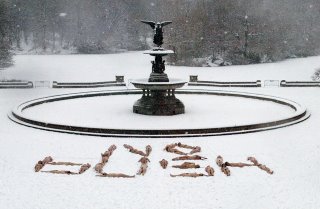 So did you hear the President this morning? Oh, man, that guy drives me crazy... I hate it when he's "candid". Bush being candid is like the office homophobe really telling you how he/she feels, disturbing. And calling out reporters... Whining about how they look at their watches, please, maybe if you said anything of interest or of substance your press corps would respond better. And Challenging the Democrats to stand up against the patriot act... Bush is so weak, "Political Capital" spent... Next! p.s. click on the image to see some real protestors.
Posted by woobot at 10:17 AM 1 comment: 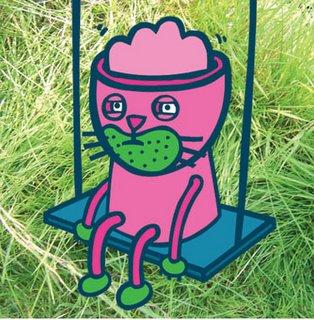 Start A Story is collaborative exercise in creativity and storytelling. People are invited to participate in a variety of projects in which they take existing materials and use them to create new narratives/comics. found on drawn!
Posted by woobot at 10:09 AM No comments: 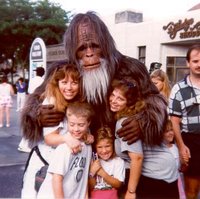 "As I was driving down the road I heard screams comming from the woods. It can be compared to an owl type hooting/cry. This caused me to slow down & to see what it was. I was driving about 5 miles an hour or less when in front of my headlights walked this creature which was on 2 legs! " Check out this link, there's video too... Cryptomundo
Posted by woobot at 9:21 AM No comments: 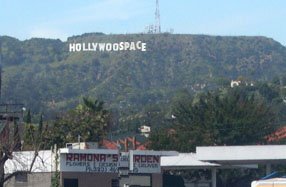 Blogger has been wonky* as of late, but I will continue to post... A friend just sent me this image, I didn't realize that he liked the blog so much, very kind.
Posted by woobot at 9:10 AM 1 comment: 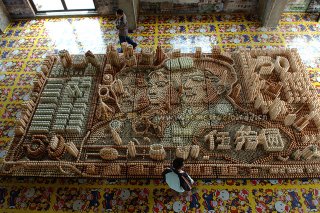 The Chinese love thier eggs, and their money... so this sculpture of the Chinese 50 note, is totally appropriate... But I am almost more impressed by the flooring... wow! more
Posted by woobot at 8:29 AM No comments: 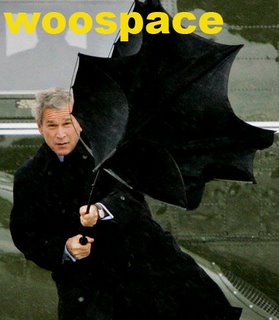