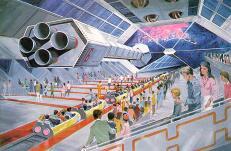 This Ride Rocks! Fianlly got to go. And really was surprised by how much fun this ride is. I also found this: Space Mountain was reopened after being closed for rehab for six years. The extensive work was necessary for two reasons. First, some riders found the ride to be a little rough. And second, there were numerous complaints that the darkness within the ride just wasn't dark enough.

It was decided that the entire Space Mountain ride track had to be removed and carefully, meticulously rebuilt by hand. Imagineers originally planned to remove the building's roof and use massive cranes to lift the old track out and put a new track in (a process that would have taken the better part of a month). But it was quickly apparent that this plan would unacceptably ruin Tomorrowland's skyline. So instead of cutting off the top of the building, Imagineers moved all construction materials in and out of the attraction through an existing exit in the back of the building. Unfortunately, this was an emergency exit and an alarm sounded every time the door was opened, causing confusion and, on many occasions, leading to the accidental summoning local fire and rescue personnel. Compounded with the fact that all track pieces had to be cut down to a size that would fit through a standard door, this caused several years to be added to the rehab time.

To make the situation even more tragic, it was found that the original reasons for closing the attraction -- not enough darkness and a rough ride -- were due a light being left on and someone spilling a jar of Tang crystals on the track.

Don't know if that was completely factual, but it's damn funny...Tang...
And heres a fun Disney geek report on the ride: click Here!!
Posted by woobot at 10:44 AM