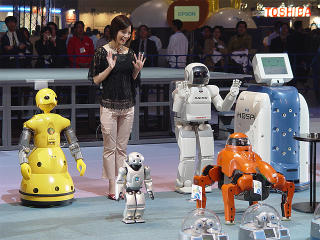 Taipei - The first ever International Robotic Simon Says competition was held Saturday. Taiwanese singing sensation, Katherine Liu, was chosen to serve as "Simon." Liu remarked before the competition, "I don't know what I'm supposed to do. They just asked me to do this, and I thought it would be fun. I've always been a big kid, I just love robots, they're so cute." More than 17 entries from around the world entered the contest. After two hours and twenty six minutes, "Dody" from Team Germany and "Nara 2" from Team Japan were the final two robots competing. Team Japan was victorious after Dody was eliminated for placing his robotic claw in the air, after Liu said "Simon says claws down."
Posted by woobot at 10:52 AM