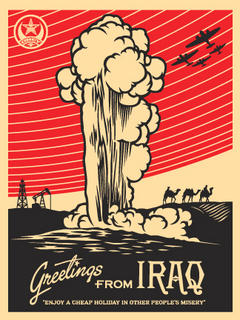 Here's a fun poster from Shepard Fairy and Comany (obey giant). Typicaly I'm not a huge fan. Afterall, he's against branding, but yet he's all about branding. Complicit, maybe just a tad. And in his post-Andre the Giant thing, it seems Shepard has taken to slick graphic designs, many of which are based in "revolutionary" signifiers. But I do admire how he's continued to hit the streets eventhough he doesn't have to. Now he's making bank in the galleries. Check out more at Obey Giant
Posted by woobot at 11:33 AM

The Daou Report
Kevin Drum, noticing the pundits' amazed tone yesterday, asked last night whether it was true that Bush accepted blame less often than other presidents... I don't think it's that other president's accept blame ...
Hey, you have a great blog here! I'm definitely going to bookmark you!
I have a free + credit + score blog. It pretty much covers free + credit + score related stuff.
Come and check it out if you get time :-)